Afghanistan: We have won the war, America has lost, say Taliban 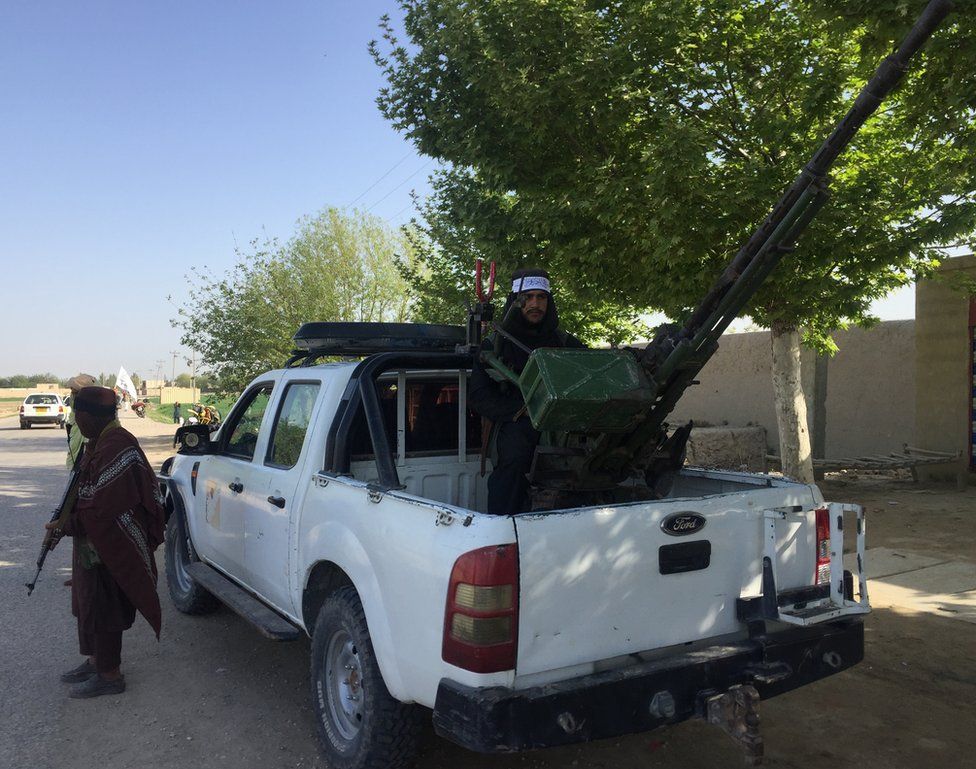 Perfumed and in a black turban, he's a veteran member of the group, having first joined the militants in the 1990s when they ruled over the majority of the country.

The Taliban have arranged a display of force for us. Lined up on either side of the street are heavily armed men, one carrying a rocket propelled grenade launcher, another an M4 assault rifle captured from US forces. Balkh was once one of the more stable parts of the country; now it's become one of the most violent.

Baryalai, a local military commander with a ferocious reputation, points down the road, "the government forces are just there by the main market, but they can't leave their bases. This territory belongs to the mujahideen".

It's a similar picture across much of Afghanistan: the government controls the cities and bigger towns, but the Taliban are encircling them, with a presence in large parts of the countryside.

The militants assert their authority through sporadic checkpoints along key roads. As Taliban members stop and question passing cars, Aamir Sahib Ajmal, the local head of the Taliban's intelligence service, tells us they're searching for people linked to the government.

"We will arrest them, and take them prisoner," he says. "Then we hand them over to our courts and they decide what will happen next."

The Taliban believe victory is theirs. Sitting over a cup of green tea, Haji Hekmat proclaims, "we have won the war and America has lost". The decision by US President Joe Biden to delay the withdrawal of remaining US forces to September, meaning they will remain in the country past the 1 May deadline agreed last year, has sparked a sharp reaction from the Taliban's political leadership. Nonetheless, momentum seems to be with the militants.

"We are ready for anything," says Haji Hekmat. "We are totally prepared for peace, and we are fully prepared for jihad." Sitting next to him, a military commander adds: "Jihad is an act of worship. Worship is something that, however much of it you do, you don't get tired."

For the past year, there has been an apparent contradiction in the Taliban's "jihad". They stopped attacks on international forces following the signing of an agreement with the US, but continued to fight with the Afghan government. Haji Hekmat, though, insists there is no contradiction. "We want an Islamic government ruled by the Sharia. We will continue our jihad until they accept our demands."

On whether or not the Taliban would be willing to share power with other Afghan political factions, Haji Hekmat defers to the group's political leadership in Qatar. "Whatever they decide we will accept," he repeatedly says.

Afghans face pivotal moment as US 'closes the book'
A year of violence on the road to peace
Fears rise as US ends its longest war
The Taliban don't see themselves as a mere rebel group, but as a government-in-waiting. They refer to themselves as the "Islamic Emirate of Afghanistan," the name they used when in power from 1996 until being overthrown in the aftermath of the 9/11 attacks.

Now, they have a sophisticated "shadow" structure, with officials in charge of overseeing everyday services in the areas they control. Haji Hekmat, the Taliban mayor, takes us on a tour.

We're shown a primary school, filled with young boys and girls scribbling in UN-donated textbooks. While in power in the 1990s, the Taliban banned female education, though they often deny that. Even now, there are reports that in other areas older girls are not allowed to attend classes. But here at least the Taliban say they're actively encouraging it.

"As long as they wear hijab, it's important for them to study," says Mawlawi Salahuddin, in charge of the Taliban's local education commission. In secondary schools, he says, only female teachers are allowed, and the veil is mandatory. "If they follow the Sharia, there is no problem."

Local sources told us the Taliban removed art and citizenship classes from the curriculum, replacing them with Islamic subjects, but otherwise follow the national syllabus.

So do the Taliban send their own daughters to school? "My daughter's very young, but when she grows up, I will send her to school and the madrassa, as long as it's implementing the hijab and Sharia," says Salahuddin.

The government pays the salaries of staff, but the Taliban are in charge. It's a hybrid system in place across the country.

At a nearby health clinic, run by an aid organisation, it's a similar story. The Taliban allow female staff to work, but they must have a male chaperone at night, and the male and female patients have been segregated. Contraception and information about family planning is readily available.

The Taliban clearly want us to see them in a more positive light. When we drive past a crowd of schoolgirls making their way home, Haji Hekmat gestures excitedly, proud to be contradicting our expectations. Concerns over the Taliban's views on women's rights remain, however. The group has no female representation at all, and in the 1990s prevented women from working outside the home.

Driving through the villages in Balkh district, we do see plenty of women, not all of whom are wearing the all-encompassing burqa, walking around freely. At the local bazaar, however, there are none. Haji Hekmat insists there is no ban on them, though in a conservative society he says they generally wouldn't attend in any case.

'The Taliban tried to kill me - for being a woman'
We are accompanied by the Taliban at all times, and the few local residents we speak to all profess their support for the group, and gratitude to them for improving security and decreasing crime. "When the government were in control, they used to jail our people and demand bribes to free them," says one elderly man. "Our people suffered a lot, now we are happy with the situation."

The Taliban's ultra-conservative values do clash less with those in more rural areas, but many, particularly in the cities, fear they want to resurrect the brutal Islamic Emirate of the 1990s, undercutting freedoms that many young people have grown up with over the past two decades.

One local resident spoke to us later, on condition of anonymity, and told us the Taliban were far stricter than they admitted in our interviews. He described villagers being slapped or beaten for shaving their beards, or having stereos smashed for listening to music. "People have no choice but to do what they say," he told the BBC, "even over minor issues they get physical. People are scared."

Haji Hekmat was part of the Taliban in the 1990s. While the younger fighters milling around us are happy snapping photos and selfies, he initially moves to cover his face with his turban when he sees our camera. "Old habits," he says with a grin, before later allowing us to film his face. Under the Taliban's old regime, photography was banned.

Did they make mistakes when in power, I ask him? Would they behave in the same way again now?

"The Taliban before and the Taliban now are the same. So comparing that time and now - nothing has changed," says Haji Hekmat. "But," he adds, "there are changes in personnel of course. Some people are harsher and some are calmer. That's normal."

The Taliban have appeared to be deliberately vague about what they mean by the "Islamic government" they want to create. Some analysts see that as a deliberate attempt to avoid internal frictions between hardline and more moderate elements. Can they both accommodate those with different views and not alienate their own base? Coming into power could prove their biggest test.

As we eat a lunch of chicken and rice, we hear the rumble of at least four separate airstrikes in the distance. Haji Hekmat is unperturbed. "It's far away, don't worry," he says.

Airpower, particularly that provided by the Americans, has been crucial over the years in holding back the Taliban's advance. The US already drastically cut back its military operations after signing an agreement with the Taliban last year, and many fear that following their withdrawal the Taliban will be placed to launch a military takeover of the country.

Haji Hekmat derides the Afghan government, or "Kabul administration" as the Taliban refer to it, as corrupt and un-Islamic. It's hard to see how men like him will reconcile with others in the country, unless it's on their own terms.

"This is jihad," he says, "it is worship. We don't do it for power but for Allah and His law. To bring Sharia to this country. Whoever stands against us we will fight against them."

Few would have expected this last chapter of the US military mission to read like this: a triumphal Taliban poised to return to power on the battlefield or through peace talks where they hold most of the cards; much-vaunted "gains" slipping away by the day in a wave of targeted killings of the educated, active, and ambitious lifeblood of an emerging society.

- This article summarizes the best/hottest IT Certifications of today and the benefits of having them.

- The city of Dubai is remarkably beautiful as well as amazing land that has different things to offer to different visitors.