Masters 2016: The quest for a green jacket starts with ... a white boiler suit The unmistakeable overalls are the traditional garb of Augusta's caddies -- the cadre of faithful lieutenants who will follow, guide and cajole their man uphill and down dale across the exclusive Georgia greensward.

The outfit may not denote a position of high office like a green jacket -- caddies are still not allowed in the clubhouse -- but it facilitates something money can't buy: Inside-the-ropes access at the Masters.

One man with a golden ticket is Englishman Billy Foster, caddie for former world No. 1 Lee Westwood, who will return for his 21st year in the suit this week.


'It can be pretty uncomfortable and pretty hot,' Foster told CNN. 'It's thicker than they look on TV, like a painter and decorator's suit. I'd rather wear my own shorts, but it makes Augusta what it is, I suppose.'

Foster, who is from Yorkshire in the north of England, began caddying as a 16-year-old in 1983, the same year Augusta allowed players to bring their regular tour caddies instead of employing one of the local black 'loopers.'

He first went to Augusta in 1991 as bagman for swashbuckling Spaniard Seve Ballesteros, who had won the Masters in 1980 and 1983.

They turned up on the Saturday before the tournament, turning off the concrete strip of Washington Road, with its neon signs, fast-food joints, motels and bars, into the hush of Augusta National's Magnolia Lane.

'You could be in a different country within the space of 100 yards,' said Foster.

'It was just the sheer tranquility of place, there was such an aura, so unique and beautiful.

'We went out for a practice round on our own and were out there for seven hours. I felt like I knew it like the back of my hand after that.'

This year Foster will get into Georgia's second biggest city on the Sunday evening after flying up from the Houston Open with Westwood.

'We stay at a little place we've rented for 20 years, off an old nun named Mrs Joyce Culpepper,' says Foster.

Mrs Culpepper died in 2010 but she used to move to a cottage in the garden allowing 'the boys,' as she called them, the run of her house.

They would cook for her and do odd jobs, and each year when they left they would write a thank you note on the chalkboard. When they returned in 2011 their final message was still there.

'In her will she left her house to her niece, but on one condition: she could live there 51 weeks of the year, but for the week of the Masters she had to let us caddies go back. So we obviously left some sort of impression.'

Foster will get to the course early on Monday morning, to catch up on the banter and climb into the suit -- worn against the skin.

'Just a pair of underpants, no shirt, no shorts,' he says. 'It's roasting out there sometimes.'

The caddies are well catered for these days, with food, drinks, showers and TVs, in a new facility near the redeveloped driving range. 'In years gone by there weren't even doors on the toilets,' says Foster.

When Westwood turns up they will play a 'pretty relaxed' 18 holes, followed by nine on Tuesday and nine on Wednesday, just to get a feel for how the course is playing and update their notebooks -- one general one and a more detailed one for Augusta's devilish greens.

'You are like a navigator for a rally driver, trying to give them all the information to end up with the right club,' says Foster, who often gets Wednesday afternoons off if Westwood has a guest caddie for the pre-Masters Par-3 event.

In the evenings, Foster and 'the boys' will frequent their favorite restaurant TBonz Steakhouse on Washington Road, or cook in and have a couple of beers at home.

Foster always walks the course -- no running at Augusta -- before a tournament round, often at first light, sharing the pine-scented property with just the greenstaff and their regimented battalions of mowers.

'It is to look at pin positions, but it's more about checking which areas are to be avoided,' says Foster, who has also caddied for Thomas Bjorn, Darren Clarke and a one-week cameo with Tiger Woods.

'Sometimes you are better off being 30ft away than 15ft away if you get on the wrong side of certain slopes or flags.

'The greens are so firm, and the wind swirls around Augusta like nowhere else. Anyone who says on the 12th tee they know 100% where the ball will land is a liar.

'It's a very demanding week, not only physically, because the elevation changes are so severe, but it's the most mentally demanding golf course we play all season.

'You can't switch off for one second or it will make you look stupid.

'It's the one tournament after the 72nd hole you put that flag stick back in, mop your brow and say, 'thank God for that, I've survived another Masters.''

'A barrage of abuse'

Augusta has precipitated the end of many player-caddie partnerships over the years. Foster fell foul after a row with Ballesteros in 1995.

The omens were bad when the Spaniard snapped his putter trying to bend it on the first tee in a practice round and fell face first onto the grass.

'I was screaming with laughter, tears rolling down my face,' says Foster. 'He didn't see the funny side of it, so that got us off to a bad start. He was like a bear with a sore head all week.'

Playing the 17th hole on the Saturday, the pair disagreed over which club to hit for the second shot. The caddie suggested a six iron, Ballesteros favored a seven. He took the six, and ball ran just through the green.

'It was perfect really, only 18ft from the hole, an easy chip straight uphill, especially if you're Seve,' says Foster.

The chip rolled eight feet past and Ballesteros missed the putt.

'He gave me the biggest rollicking -- three times on the green and another ear-bashing on the way to the 18th,' says Foster.

'The red mist was descending. I was ready to erupt. He had another go on the 18th tee. So I just shouted and screamed, 'I can hear you, alright.''

The atmosphere was beyond icy. After the round, Foster was summoned to the practice range by Ballesteros' brother. He was told to measure how far the Spaniard was hitting his wedges.

'I was pretty much on the verge of a nervous breakdown at this stage,' he says. 'They were taking one bounce and I was heading them, 15 in a row. Everybody was laughing behind in the grandstand but I was raging.'

Eventually, they agreed to meet and sat in front of the clubhouse, where Foster 'unleashed a barrage of abuse.'

'Ultimately, no-one had spoken to Seve that way and I got a call on the Tuesday saying I was no longer required,' he says. 'We got on very well again a few weeks after that, but you move on.

'It was a fantastic experience [working for Seve] and something I'll cherish for the rest of my life. I owe him a lot and I will be eternally grateful.'

As the old saying goes, the Masters doesn't begin until the back nine on Sunday, when charges are made and the famous roars reverberate around the pines.

'But you hear the roars. You can predict who it is and where they are by the noise.'

In 2010, Foster and Westwood knew exactly who it was when playing partner Phil Mickelson whipped up a storm on the Sunday afternoon.

Westwood had led since the second round, but the popular American edged two shots clear after the short 12th at the heart of Amen Corner.

Ever the gambler, Mickelson twisted when most others would stick.

His drive on the dog-leg par-five 13th ran through the fairway and nestled in pine straw behind a tree. Instead of chipping out sideways, the left-hander shaped to hit a six iron through a narrow gap.

'We were both shaking our heads. I was saying, 'he's bonkers going for this, mental,'' recalls Foster.

'It was a lunatic shot in my mind.'

Mickelson pulled the trigger and the ball cleared the tributary of Rae's Creek in front of the green and came to rest four feet from the hole. 'We were like, 'wow,'' says Foster.

They shared birdies, but Mickelson mania was in full swing. Foster was trying to keep a clear head in the maelstrom.

'You've got to slow down your thought process and keep in check of your emotions, that's your job as a caddie,' he said.

'You're the lead on the player -- pulling him back like a dog, and stopping him rushing his decisions.

'Things will go wrong, no doubt about it. That's the way it is at Augusta.

'It is just a case of knowing when to say something to a player and when to keep quiet for a couple of minutes.'

Mickelson's magic was too powerful that year, and he surged to a third Masters title.

Westwood and Foster are still seeking an elusive green jacket. Maybe even a green boiler suit, if such a thing existed.

Who do you think will win the Masters? Have your say on the CNN Sport Facebook page.

Masters 2016: The quest for a green jacket starts with ... a white boiler suit

- The unmistakeable overalls are the traditional garb of Augustas caddies -- the cadre of faithful lieutenants who will follow, gui Federer becomes No. 1 of the No. 1s; Serena draws level with Venus

- Roger Federers reputation as one of the finest tennis players of all time was cemented on Monday, as the Swiss broke Pete Sampras 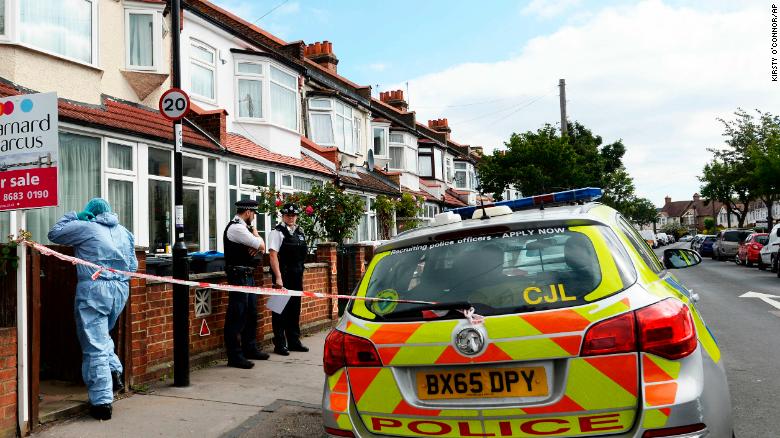 Baby delivered after mother stabbed to death in London