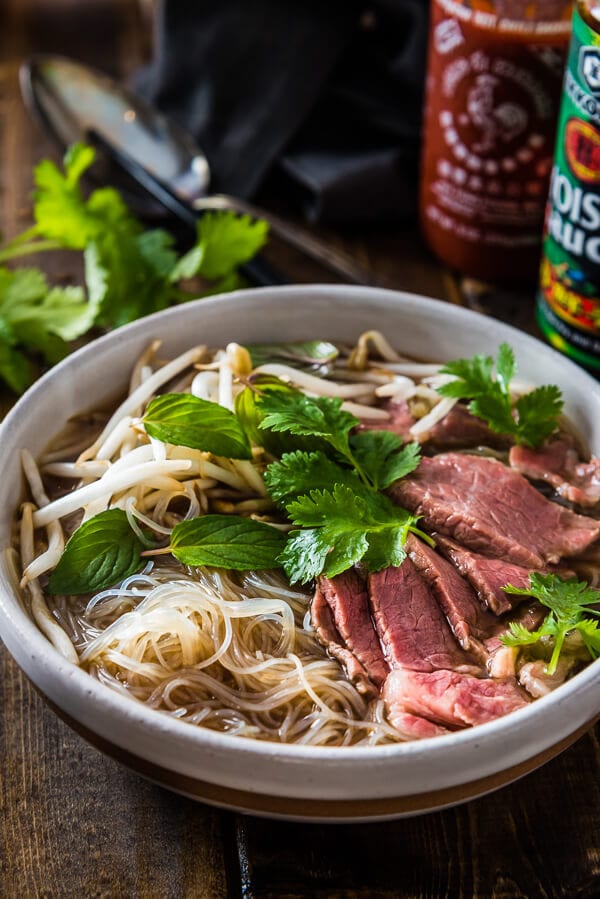 Vietnam is one of the world’s best countries for food. We’ve been to Vietnam several times now and Vietnamese cuisine always leaves us wanting for more.

Pho is a noodle soup that originated in the north but it’s now popular throughout Vietnam. Regardless of where it’s from, it’s made with four basic ingredients – clear stock, rice noodles (called banh pho), meat (typically beef or chicken), and herbs.

The origin of pho can be traced to early 20th century Nam Dinh Province in northern Vietnam. The higher availability of beef due to French demand resulted in a surplus of beef bones which were then used as the base for modern pho.

With the Partition of Vietnam in 1954, over a million people fled from the north to the south, bringing with them their affinity for this beloved food. This helped popularize pho in other parts of Vietnam, which in turn led to further development of the dish.

Unconstrained by the culinary traditions of the north, variations in meat and broth appeared, as did additional garnishes like lime, bean sprouts, culantro, cinnamon basil, hoisin, and hot chili sauce. Today, several varieties of pho exist, most notably pho bac or “northern pho”, and pho Sai Gon or “southern pho”.

Northern pho tends to use wider noodles and a lot more green onions. Garnishes are generally limited only to vinegar, fish sauce, and chili sauce. Southern pho, on the other hand, has a sweeter broth and is topped with bean sprouts and a wider variety of fresh herbs.
Bowl of pho in Hanoi

2. Banh Mi
Like pho, banh mi is a Vietnamese food favorite. Even if you aren’t that familiar with Vietnamese food or have never been to Vietnam, chances are you’ve at least heard of banh mi. It’s considered a Vietnamese national dish and can be found pretty much anywhere in Vietnam.

Strictly speaking, “banh mi” is the Vietnamese word for the baguette which was introduced by the French during the colonial period. But when most people say “banh mi”, they’re referring specifically to the baguette sandwich made with different types of meat, vegetables, and condiments.

Pork is frequently used in the sandwich in many forms like paté, grilled patties, Vietnamese sausage, cold cuts, terrine, and floss. Commonly used vegetables include cucumber slices, coriander, pickled carrots, and shredded radish. But like any sandwich, you can basically put whatever you want in a banh mi so there are many varieties made with other ingredients as well like duck, egg, grilled chicken, fish cake, etc.

No matter what you put in a banh mi, what makes this sandwich truly special is the bread. They make it so crusty and crunchy on the outside but soft and pillowy on the inside that it sort of crumbles in on itself when you take a bite. It is so good and one of my absolute favorite foods to eat in Vietnam.
Banh mi in Hoi An

Goi cuon is often served with a peanut hoisin dipping sauce along with other sauces like nuoc mam pha or fish sauce. Soft, light, and savory-sweet, goi cuon is a delicious and refreshing Vietnamese food favorite. If you prefer deep-fried spring rolls, then there’s an equally popular version of this dish called cha gio (called nem ran in the North).
Nem cuon in Hoi An

4. Bun Cha
Bun cha is one of northern Vietnam’s most beloved foods and the reason why bun thịt nuong is popular everywhere in Vietnam except Hanoi.

Like bun thịt nuong, bun cha is a charcoal-grilled pork dish served with cold vermicelli noodles (bun) and fresh greens like lettuce, perilla, coriander, and mint. The main difference, as far as I can tell, is in the preparation of the meat.

The pork comes in meatball patty form, along with some grilled pork belly, and served in a soupy bowl of pickled vegetables that impart acidity to the dish. Unlike the ingredients of bun thịt nuong which are served together in one bowl, the components of bun cha – pork, noodles, greens, and nuoc cham – are presented separately.

As good as bun thịt nuong is, bun cha may even be better. They’re closely related dishes but for me, there’s more going on with bun cha in terms of flavor and texture. Like pho and banh mi, it’s one of the tastiest examples of Vietnamese food and a must-try when in Hanoi.

Bun cha is often eaten with a side of nem cua be or deep-fried crab spring rolls. The combination is fantastic so be sure to order a side of nem with your bun cha.
Bun cha in Hanoi

Like bun cha, there’s a good balance of flavor and texture in bun thit nuong that’s easy on the palate. You have smokey pork, sour and crunchy pickled vegetables, fresh greens, peanuts, and a sweet-savory fish sauce dressing over a bed of cold sticky rice vermicelli noodles. Unless you don’t eat meat, it’s hard to imagine anyone not liking this dish.
Bun thit nuong in Saigon

6. Cao Lau
Cao Lau is perhaps the single most important Vietnamese dish in Hoi An regional cuisine. If you were to have just one dish in Hoi An, then this should be it.

Cao Lau is a dry noodle dish made with rice flour noodles topped with cha siu pork, fresh greens, herbs, rice crackers, and fried pork rinds. Like banh bao banh vac, what makes this dish so quintessentially Hoi An is that authentic cao lau noodles need to be made with water sourced from a specific local well.

People claim that the water needed to make the noodles must be drawn from a local Cham well called the Ba Le Well. The alkaline water from this well is said to be the secret to the chewier texture of cao lau noodles.

Wood ash from trees that grow on Cham Island is mixed with the well’s alkaline water to create a lye solution used to pre-soak the noodles. This is what gives them their distinctively yellow tinge. After soaking in the lye solution, the noodles are then smoked over an ash-burning furnace to give them a smoky flavor.

It sounds like a lot of work just to prepare noodles but the results speak for themselves. Smokey and chewy, these noodles are delicious and an absolute must-try in central Vietnam.

Mythical stories about the Ba Le Well have made some people skeptical about its properties, but I’ve heard similar claims about the fog in San Francisco and the water in Philadelphia playing a critical role in their bread production. Folklore aside, I don’t think it’s that far-fetched.
Cao lau in Hoi An

7. Mi Quang
Like cao lau, mi quang is a specialty of Quang Nam Province. A quintessential Da Nang food, what cao lau is to Hoi An, mi quang is to Da Nang.

Mi quang is a rice noodle dish made with chicken (or pork) broth topped with a host of proteins from chicken to shrimp to snakehead fish. It’s served with a bowl of fresh greens and herbs along with a few condiments.

Unlike cao lau that’s served dry, mi quang is a slightly soupier dish made with a wider type of rice noodle. Its stock is made by simmering meat (typically chicken or pork) in water or bone broth before seasoning with black pepper, fish sauce, shallots, and cu nen – a pungent, garlic-type vegetable.

The simmering process creates a concentrated broth that’s more intense in flavor than a traditional noodle soup. The broth is then ladled about 1-2 cm deep into a bowl of noodles topped with different proteins like pork, shrimp, and hard-boiled quail eggs. It’s typically garnished with crushed peanuts, green onions, and chili, and served with fresh herbs, a rice cracker, whole green chilis, and lime.

There’s a saying in Vietnam about mi quang that goes like this: Thương nhau múc bát chè xanh, Làm tô mì Quảng anh xơi cho cùng. The Vietnamese saying describes a girl from Quang Nam province who invites her lover to drink a cup of tea and eat a bowl of mi quang, to prove to him the depth of her love. That’s how special a dish mi quang is in Quang Nam province.

Mi quang is a Da Nang dish so I imagine the best versions can be found there. Unfortunately, we haven’t tried it in Da Nang but you can find mi quang everywhere in Hoi An.
Mi quang in Hoi An

8. Oc
Oc is the Vietnamese word for snail – a popular delicacy in Vietnam. They come in many forms and are harvested from the ocean as well as from freshwater sources like rice paddies and lakes throughout Vietnam.

I thought that the Vietnamese fondness for snails may have been a vestige of French colonial influence but as it turns out, the Vietnamese have been feasting on snails long before the French arrived. An oc or “snail eating” is part of nhau culture, which is the Vietnamese word for “going out, eating, drinking, and socializing”. Eating snails is so popular that it’s considered a national pastime in Vietnam.

Delicious, easy to eat, and prepared in any number of ways, snails go very well with beer so I can understand why it’s such a popular drinking food in Vietnam.
Snails in Saigon

9. Cha Ca
Like bun cha, this is one of the most beloved foods in northern Vietnam. Named after the restaurant that popularized it over a hundred years ago, cha ca la vọng is a classic Hanoi specialty of grilled turmeric-marinated catfish served with a forest of fresh dill.

To make cha ca, catfish caught from the rivers of northern Vietnam are cut into matchbox-sized nuggets that are marinated in galangal, turmeric, and other spices. They’re grilled on charcoal before being brought out to pan fry on your table with heaping amounts of fresh dill and spring onions.

Once ready, the nuggets of fish are served with rice vermicelli, roasted peanuts, and coriander, along with a dipping sauce made with nuoc cham (fish sauce), vinegar, and garlic. If you like, you can also add a bit of Vietnamese shrimp paste (mam tom) mixed with lime juice.

Smokey and aromatic, the fish is tender and flaky on the inside with a delicate, crisp caramelized coating. It’s seriously delicious and one of the best things we ate in Vietnam. In fact, so good is this dish that it was once included in a list of 1,000 foods you must eat before you die.

Cha ca was popularized by the La Vong restaurant in Hanoi. It’s still open today though based on its negative reviews, it’s best days may be behind it. There are better places to have cha ca in Hanoi.
Cha ca in Hanoi

Banh cuon are rice rolls made from a thin sheet of steamed fermented rice batter filled with seasoned ground pork and wood ear mushrooms. Topped with herbs and fried shallots and served with a bowl of nuoc cham (Vietnamese fish sauce), they’re typically served with a side of gio lua (Vietnamese pork sausage), sliced cucumber, and bean sprouts.

I was watching them make it in Hanoi and one Learning music in our schools is important because it develops