Surrealism, original design solutions, bright palette - these are just some of the attributes of any psychedelic game. Often, such projects can boast of atypical gameplay mechanics, a very peculiar plot and an abnormal atmosphere. Do you like truly unusual games? Add to this collection!

Schrodinger's Cat and the Raiders of the Lost Quark 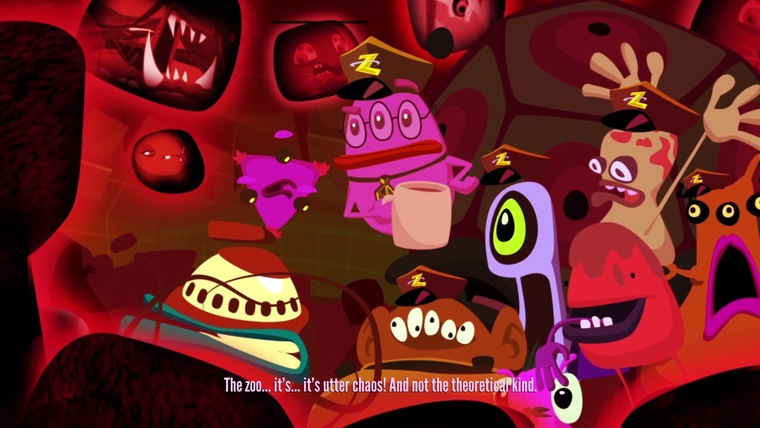 Team17 Digital has always had a rich imagination, just remember the Worm series of games about combat "worms", which made a lot of hype after the release of Worms Armageddon. Under the wing of the studio, Italic Pig presented players with an equally funny Schrodinger's Cat and the Raiders of the Lost Quark.

Quantum mechanics, "acid palette", original setting and good platforming. And Shreddinger's cat in the lead role, which is looking for missing subatomic particles.

The game captivates with its visual style, although the elements of the platforming are implemented in it at a fairly high level. You shouldn't wait for the prohibitive complexity, the project is not aimed at this. But he will be able to give a dozen pleasant hours during the passage.

Hohokum is hard enough to wrap in some kind of genre framework. You will not find complex gameplay mechanics here - players will spend most of the passage trying to explore the mysterious world of the game.

First of all, Hohokum impresses with its visual style and meditative music. In general, the rest of the game has little to offer gamers, which does not make it "worse" or "better" compared to other projects. Hohokum is its own surreal world, in which the artistic component is put in the first place, not the gameplay.

Japanese developers have always been very imaginative. Add in this original concept and colorful palette of colors and we have Locoroco. One of the main hits of the PlayStation Portable smoothly migrated to the PlayStation Vita and PlayStation 4.

From a gameplay point of view, Locoroco is a canon platformer. The main task at each level is to move from point A to point B, as well as collect items and search for secrets. The main character is a spherical creature who sings a song in a fictional language throughout the entire level. The more the main character collects the berries scattered around the location, the more he will be.

Also, the character can disband, and the player will take control of several "small creatures." More berries - more creatures, which allows you to penetrate into hard-to-reach places on the levels and diversifies the gameplay quite well.

In total, the game features 40 levels, eight playable characters, three mini-games and the ability to equip your own house for your creatures. All fans of platformers - be sure to familiarize yourself.

One of the brightest spin-offs in the gaming industry and just a great addition to Far Cry 3. The developers decided to move away from the standard DLC concept in the style of "add new quests, guns and missions" and presented the players with a different setting. With all that it implies.

Far Cry 3 Blood Dragon can be called a reference to the most popular action films of the 80s. Neon, deliberate pathos and the never-ending feeling that you are somewhere in another reality. The addition surprises at least with its visual style. Weapons, enemies, decorations - everything has been redesigned, and when you first look at the DLC, it's hard to guess that we are talking about a spin-off to Far Cry 3.

The developers approached the development of Blood Dragon with a soul. Here you can find references to such classics of cinema as "Terminator", "Predator", "Robocop", "Star Wars", "Alien" and even to "Teenage Mutant Ninja Turtles". The soundtrack deserves special attention, which will appeal to all fans of synthwave and its subgenres.

One of the most important aspects of interactive entertainment is to give the gamer the ability to influence the world of the game. In the case of Catherine, this is expressed in several endings, each of which is the result of the player's actions that he has to do in the course of the game.

The gameplay of the game is divided into two parts. In the first, the main character will have to conduct a large number of dialogues (hello, the Persona series), the second is an atypical and rather original platformer. This is not to say that the game mechanics used in this part are amazing - the main focus here is on the setting. All puzzles represent an introspection of the protagonist's experiences in his dreams, with all that it implies.

If you are not intimidated by the Japanese style, and you appreciate original stories in games, it is generally imperative to get acquainted.

What are the important points to know while purchasing an electric trolley?

- When wanting to shift the loads from one place to another, then you are in need to get suitable lifting equipment. And this is known as an electric trolley

- Online education courses offer a new horizon of possibilities for people who are unable to go to college for various reasons. These courses are designed to fit

The Education Triangle - Why Parental Involvement is Pivotal

- We are all concerned about the state of education. From declining test scores and underfunding, to high school dropout and illiteracy rates, it can sometimes se